As one of the oldest club competitions in England, the FA Cup has produced numerous unforgettable moments in English football.

Given the exponential increase of tension between rival teams like Manchester United and Liverpool as each one fights for the most decorated club in Egland, it has always been fun to watch the FA Cup.

However, as the 2021/2022 English FA Cup is underway, it is time you join the action and enjoy every moment of the competition. So, in this guide, I will show you how to watch FA Cup matches live on DStv.

With the likes of Liverpool, Manchester United, Man City, Chelsea, Tottenham Hotspur, and many others, the English FA Cup never gets boring.

Consistently, DStv has broadcast the FA Cup matches live on SuperSport, and this year’s English FA Cup is already in their broadcast basket.

So it’s time to dust off your DStv decoder and subscribe to the Compact package and above to watch FA Cup games on SuperSport.

Moreover, if you already have a DStv decoder, let me show you how to watch the English FA Cup match on DStv today.

DStv has acquired the broadcast rights to show all matches from the English FA Cup matches live on SuperSport. It will be available to all DStv subscribers on Compact, Compact Plus, and Premium packages.

Yes, DStv shows all matches from the English FA Cup live on SuperSport as they have acquired the FA Cup broadcast rights. So, be ready to watch this year’s English FA Cup matches live on DStv.

Yes, today’s FA Cup match will be shown live on DStv SuperSport. Kindly ensure that you have an active subscription of the DStv Compact bouquet and above to get all FA matches on DStv.

Which Channel Is FA Cup On DStv

DStv shows all matches of the English FA Cup live on the SuperSport Premier League channel. You can switch the DStv channel 223 or 203 to watch today’s FA Cup match on DStv.

You can subscribe to the following DStv packages to watch all FA Cup matches live on DStv:

That is all we have for you on how to watch English FA Cup match on DStv today. 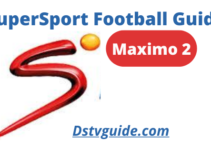